The most recent big news is that a federal judge issued a preliminary injunction temporarily barring Prop 65 acrylamide lawsuits based on the failure to warn for cancer risk. Specifically, the March 30, 2021 Order states:

While this action is pending and until a further order of this court, no person may file or prosecute a new lawsuit to enforce the Proposition 65 warning requirement for cancer as applied to acrylamide in food and beverage products.

Order at p. 31. The Order does not, however, “alter any existing consent decrees, settlements, or other agreements related to Proposition 65 warning requirements.”  Id.

The Order was issued in California Chamber of Commerce v. Xavier Becerra, Eastern District of California Case No. 2:19-cv-02019, in which the California Chamber of Commerce argued that “California has compelled businesses to display misleading warnings about the dangers of acrylamide” given the insufficient evidence of cancer risks in humans. Order at p. 1.  In issuing the injunction, Chief District Court Judge Kimberly J. Mueller held that the State failed to demonstrate that Prop 65 cancer warnings for acrylamide were “purely factual and uncontroversial” and focused on the undue burden on the regulated industry. It remains to be seen whether the State will appeal or seek to dissolve the injunction or permit the enforcement of alternative warnings.

By way of background, acrylamide was first added to the Prop 65 list of chemicals in 1990 for cancer risk. However, acrylamide wasn’t detected in foods until 2002. Order at p. 2.  In 2002, scientists began to associate acrylamide with the roasting, baking, and frying processes of plant-based foods like potatoes, bread, crackers, and coffee.  Id.

The problem with regulating acrylamide under Prop 65 is that acrylamide is not an additive. Acrylamide in food forms from sugars and an amino acid (asparagine) that are naturally present in food.  See https://www.fda.gov/food/chemicals/acrylamide-questions-and-answers. So unlike other more “traditional” chemicals, companies can’t just eliminate acrylamide altogether by replacing it with something else.

Additionally, acrylamide is omnipresent. According to one study, more than one-third of the calories consumed by U.S. and European populations contain acrylamide. See Mucci and Wilson, 2008 “Acrylamide Intake through Diet and Human Cancer Risk” available here.

The Prop 65 safe harbor for acrylamide, called the “No Significant Risk Level” (“NSRL”), is also quite low. OEHHA determined that an exposure of 0.2 micrograms of acrylamide per day “poses no significant risk.” Order at p. 11, citing Cal. Code Regs. Tit. 27, § 25705(c)(2).  For adults, estimated average intakes range from approximately 0.3 to 0.6micrograms per kilogram of body weight per day, meaning that most of us far exceed the NSRL on a daily basis. Mucci and Wilson, 2008.

Acrylamide has a litigious past. In response to Prop 65 acrylamide lawsuits in 2008, french fry manufacturers agreed to display warnings, potato chip manufacturers agreed to reduce acrylamide levels in chips, and defendants paid more than $2 million in penalties and attorneys’ fees. Order at p. 12.  In 2014 and 2018, a judge ruled that coffee companies were required to provide warnings on coffee sold in California. That ruling was maintained until June 2019, when OEHHA evaluated all available studies and disagreed with the judge’s decisions in determining that Prop 65 warnings for coffee were not required.

OEHHA is in the process of a regulatory rulemaking potentially amending the Prop 65 regulations to specify new safe harbor levels for certain classes of heat-processed foods. The new regulation would potentially eliminate Prop 65 warning requirements for foods created by cooking or heat processing if the producer, manufacturers, distributor or holder of the food has “utilized quality control measures that reduce the chemical to the lowest level currently feasible.” The new regulation would also specify acrylamide safe harbor levels for a variety of food categories, such as almonds, bread, crackers, and potato products. A link to the proposed regulation is here.

Between the court’s injunction and the regulatory rulemaking, it appears that relief may be near.  In the meantime, be aware of this rapidly evolving landscape. 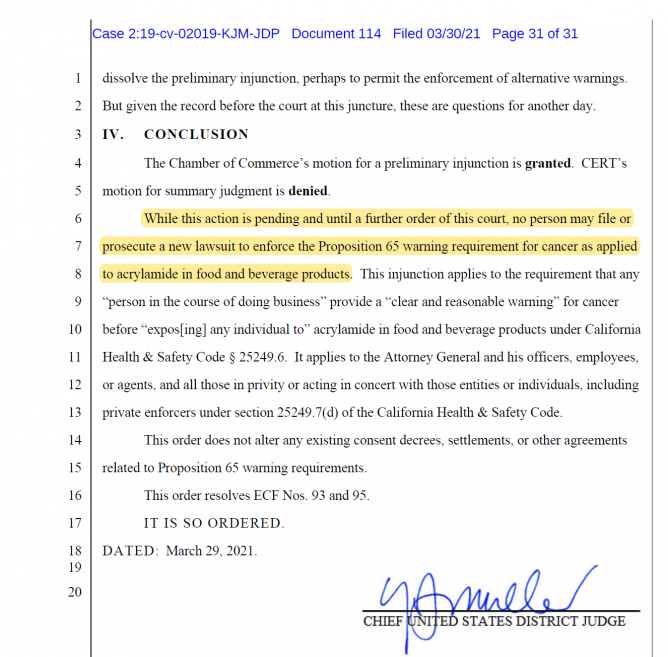